The Town of Peshtigo operates a volunteer based, paid-per-call fire department consisting of up to 25 firefighters that have proudly served our community for over 57 years.
Established in 1964, the department covers the entire 74 square mile Town of Peshtigo, serving a population of approximately 4,100 residents. The service area includes those rural areas outside the city limits of both Marinette and Peshtigo and extending into the waters of Green Bay on two sides.

Through its fire department, the Town provides primarily fire protection and technical rescue services, relying on the private volunteer Emergency Rescue Squad and hospital based paramedics to provide emergency medical services. Call volume averages 90-100 calls per year and all responses are based out of one fire station on Old Peshtigo Road.

The Town of Peshtigo Fire Department is an active member of the Marinette County Fire Association and Mutual Aid Box Alarm System (MABAS) Division 144.
Town firefighters are all trained to meet or exceed state mandated training standards. In addition, the department has a number of firefighters trained as hazardous materials technicians that assist the City of Marinette Hazmat Team and several that are state certified fire instructors.

The mission of the Town of Peshtigo Fire Department is to provide fire protection and related emergency services in order to ensure the safety and well-being of all town residents, occupants, visitors and their properties.

Our vision is to provide high quality and efficient emergency services by developing and maintaining community partnerships, by hiring and training exceptional volunteers, and by meeting or exceeding state and national standards as related to the fire service.

We value having pride in our organization, the service we provide, and the equipment we use.

We value the honor of being part of a profession that is trusted by the community.

We value the integrity and honesty of our members and what upholding these values means to our customers.

We value the dedication, commitment to excellence, and reliability in everything we do.

We value leadership, teamwork, innovation, respect and tolerance in our organization.

We value cooperation and partnerships with other emergency service providers.

We value the social good in what we do as an organization and as individuals.

We continually seek out individuals who are team players with a strong desire to help others, possessing the courage and dedication to respond to emergencies at a moment's notice. We do have high expectations of our volunteers, but we respect the fact that they have lives, families and jobs that take precedent outside the fire department. We do promote training beyond the minimum standards and ask for regular participation in department activities. In exchange for your commitment, we promise to treat our firefighters with respect, outfit them with the best equipment available and we won’t waste your time.

We thank and honor all past members of the Town of Peshtigo Fire Department who retired after reaching the age of 50 and having served as a volunteer firefighter for at least 15 years.

If you know of other retirees who are missing from this list please let us know so we can add them. 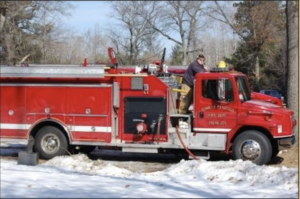 This 1994 pumper was built by 3-D in Shawano. This had been our front-line engine until replaced by Engine 207 in 2010. This apparatus holds 1,000 gallons of water, is rated to pump 1,000 gallons per minute and is equipped with a compressed air foam system (CAFS). 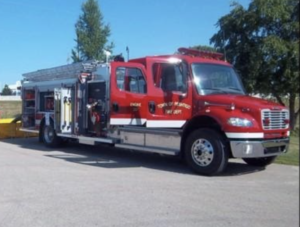 This 2010 rescue pumper was built by Rosenbauer America on a commercial Freightliner chassis. This pumper was placed into service in April 2010, carries 1,000 gallons of water and is capable of pumping 1,250 gallons per minute. This truck is also used to carry our extrication equipment, commonly known as the “Jaws of Life”. This is our primary first due engine and has a four-person cab which permits us to respond with a full crew of firefighters. 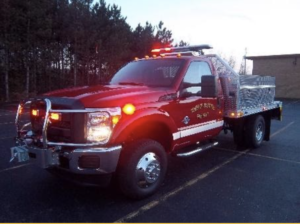 This brush truck was placed into service in late 2013. The unit is built on an F-350 diesel powered 4x4 chassis with a flat rack equipped with compartments and a 225 gallon water tank with an 18 hp mounted pump. This apparatus is the primary response vehicle for grass and brush fires, provides support at vehicle crashes and is used to tow our water rescue trailer. 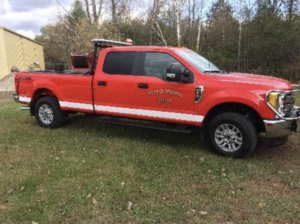 This is a 2017 F-350 four-wheel drive pick-up. This truck is outfitted with a skid unit that is removed in winter months when not needed for grass fires. It is used primarily for wildland fires and incident support. It also pulls the trailer with our fire/rescue UTV and rescue boat. 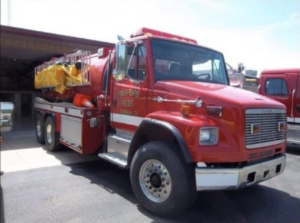 This is a 3,500-gallon vacuum tanker, which was purchased new in 2002. Built on a commercial Freightliner chassis, this apparatus brings much needed water to the scene of a fire, dumps it within minutes into a portable folding water tank and goes to a water source to re-fill. 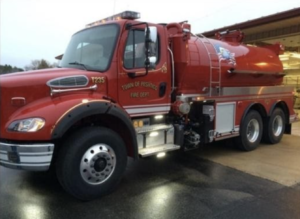 This is a 3,200-gallon vacuum tanker, which was purchased new in 2016. Built by Stainless & Repair from Marshfield, WI on a commercial Freightliner chassis, it meets all current NFPA standards for fire apparatus of this nature and is our primary rural water shuttling apparatus. 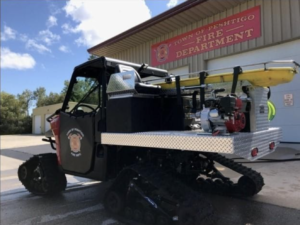 This fully tracked UTV unit was purchased in 2019 and is equipped with both a 70-gallon water tank and pump to extinguish grass fires as well as a rescue body that allows us to safely transport a patient over difficult terrain. 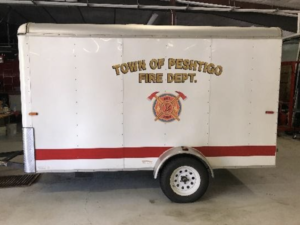 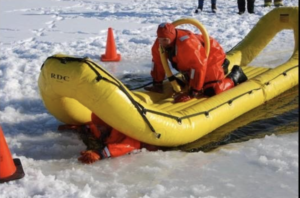 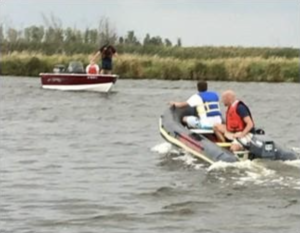 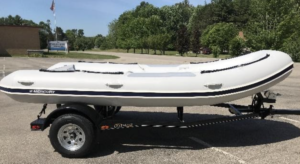 Our current 10 ft. semi-rigid inflatable boat is equipped with a 9.9 hp four stroke outboard motor. This boat is in the process of being replaced with a larger and more stable Mercury Ocean Runner 460 RIB boat in 2021. The new rescue craft is 15 ft and will have a 40 hp Mercury motor making it ideal for performing safe water rescues either on the bay or in the Peshtigo River.

A portable fire extinguisher can save lives and property by putting out a small fire or containing it until the fire department arrives; but portable extinguishers have limitations. Because fire grows and spreads so rapidly, the #1 priority for residents is to get out safely.

Class A – Ordinary combustibles such as wood, cloth and paper

Class B – Flammable Liquids such as oil and gasoline

Class D – Combustible metals such as magnesium and sodium

To operate a fire extinguisher, remember the word PASS:
Pull the pin. Hold the extinguisher with the nozzle pointing away from you, and release the locking mechanism.

Aim low. Point the extinguisher at the base of the fire.

Squeeze the lever slowly and evenly.

Sweep the nozzle from side-to-side. 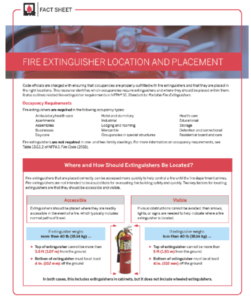 Smoke alarms are a key part of any home fire escape plan. Smoke alarms should be installed on every level of your home and inside each bedroom. Working smoke alarms provide early detection of a fire. Make sure to test your alarm monthly, change the batteries twice each year and replace smoke alarms every ten years to insure they work properly. 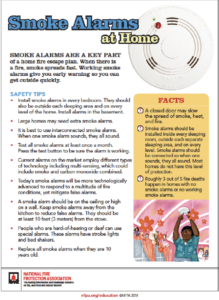 Carbon monoxide is an invisible, colorless and odorless gas that results from incomplete combustion of fossil fuels such as natural gas, propane or burning wood. Carbon Monoxide detectors should be installed outside of every bedroom and on all floors of each residence. Test your alarms monthly, check for low batteries and, if the alarm sounds, move to fresh air and call 911. 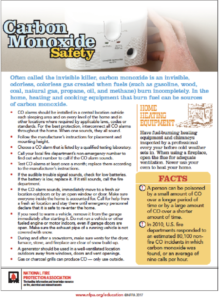 Cooking fires are the number one cause of home fires and home injuries. The leading cause of fires in the kitchen is unattended cooking.

What you should know about home cooking safety

If you have a cooking fire 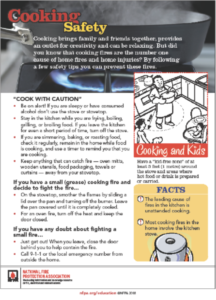 Exit Drills in the Home Expand

Fire can spread rapidly through your home, leaving you as little as one or two minutes to escape safely once the smoke alarm sounds. A closed door may slow the spread of smoke, heat and fire. Install smoke alarms in every sleeping room and outside each separate sleeping area. Install alarms on every level of the home. Pull together everyone in your household and make a plan. Walk through your home and inspect all possible exits and escape routes. Households with children should consider drawing a floor plan of your home, marking two ways out of each room, including windows and doors. 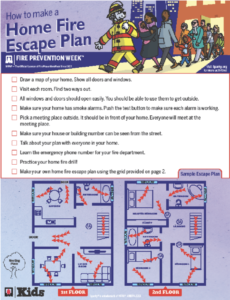 Prior to conducting any open burning within the Town of Peshtigo a DNR annual burning permit must be obtained whenever the ground is not completely covered with snow. After obtaining your permit, and prior to burning, you must then call 1-888-WIS-BURN or go to https://dnr.wi.gov/topic/ForestFire/restrictions.asp to check the daily burning restrictions and fire danger.
Burning permit requirements with a link to obtain a DNR burning permit application:  https://dnr.wisconsin.gov/topic/forestfire/permits

Burning permits are NOT required anytime the ground is completely snow covered or for fires such as campfires designed solely for cooking food or warming purposes. 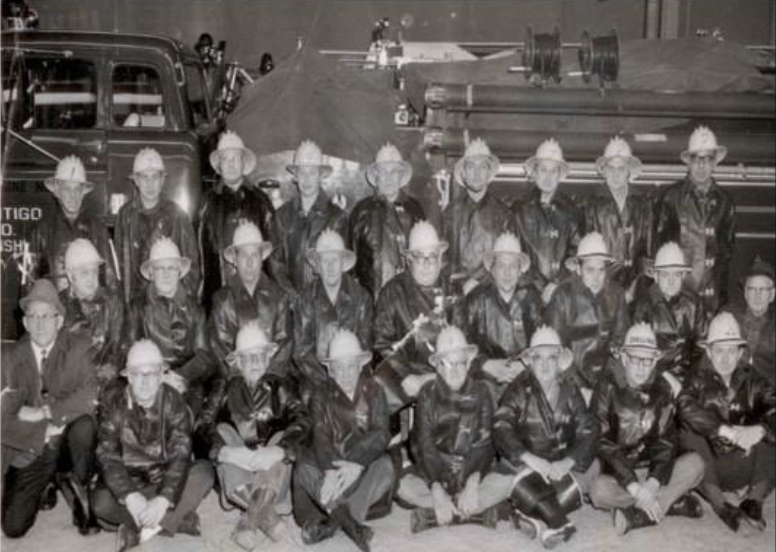 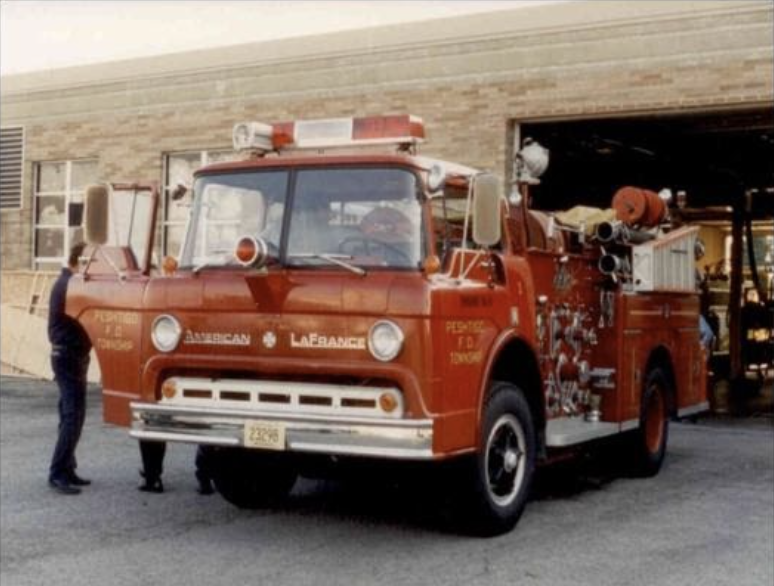 A chronological timeline of the fire department since its inception in 1964: Expand

April 28, 1964
First meeting of the new organization held at the town hall

Purchased the first pumper truck, an American LaFrance, to be housed in Marinette under contract

October 1964
Town Board abolished the ordinance authorizing the volunteer firefighting company and created a Town of Peshtigo Fire Department. All current officers to remain the same with Howard Rettke as fire chief

April 1965
Pay rate of $1.00 per hour set by the town board for volunteers responding to fires

June 1966
First tanker truck chassis purchased from Gustman – A 1966 Chevrolet to be outfitted with a 1,000 gal. water tank

Model By-Laws approved by the Town Board

July 1980
New base radio and 180 ft. radio tower installed at the fire station

October 6, 1992
Public hearing at the town hall regarding termination of the contract with Marinette and taking a truck out of the Marinette station. Town decided to maintain the contract.

January 1994
Town Board orders a new truck (Engine 205) from 3-D in Shawano to replace the original truck purchased in 1964. New engine is equipped with a Compressed Air Foam System and delivered in October.

May 1994
I.S.O. conducted a field audit and improved the town’s Public Protection Class rating to 7

September 1994
Engine 204 taken out of service at Marinette Fire Dept. and sold. Engine 206 moved to Marinette Fire Station upon delivery of new engine

December 2000
Contract with Marinette terminated at the end of the year with Engine 206 being moved back to the Town of Peshtigo Fire Station. Marinette will provide mutual aid upon request.

April 2010
New fire engine (E-207) delivered. Built by Rosenbauer America on a Freightliner chassis. Replaces Engine 206 which was sold to The Motor Company for $4,000

August 2014
As a result of an I.S.O. field audit, the town’s Public Protection Class rating improved to class 6 for all properties within 5 miles of the fire station.

October 2017
New 2017 F-350 four-wheel drive pickup truck with a crew cab (Brush 2) was purchased locally from the Motor Company and outfitted with a winch, emergency equipment package and the Department’s existing skid unit at a total cost of $47,153. This truck replaced the 1986 military surplus truck that was on loan from, and returned to the DNR.

2018
A used, 10 ft. inflatable, Avon, semi-rigid boat equipped with a 9.9 hp four stroke outboard motor, was purchased with funds from grants and donations at no cost to taxpayers. The boat comfortably carries two people and is equipped for performing rescue work either in the Peshtigo River or near shore waters of Green Bay.

April 2019
New Polaris 900 UTV, outfitted with tracks, was purchased from Cozzy’s Polaris for $19,000. A firefighting/rescue skid was fabricated by Stainless & Repair of Marshfield, WI, and mounted on the back of the UTV at an additional cost of

Remembering the Peshtigo Fire of 1871

2021 is the Sesquicentennial year of America’s most deadly forest fire that burned over 1.2 million acres in northeast Wisconsin, also taking over 1,000 lives on October 8, 1871.

A number of events will be held in Peshtigo during September 24-26 to commemorate this tragedy. As details are finalized, they will be posted here and at https://www.facebook.com/peshtigohistoricaldays/ 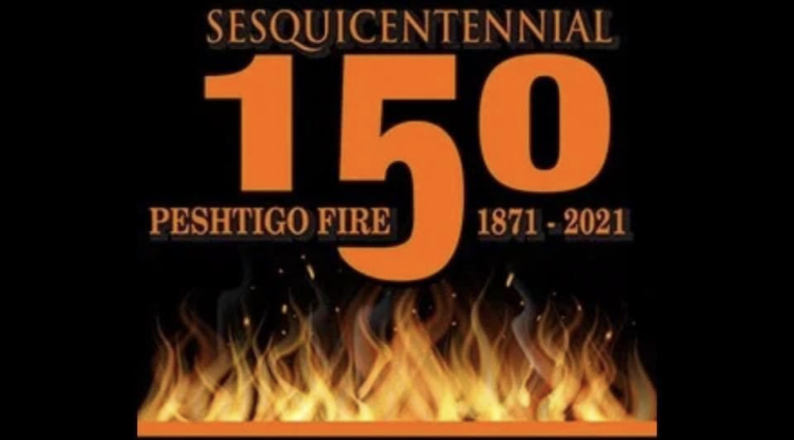 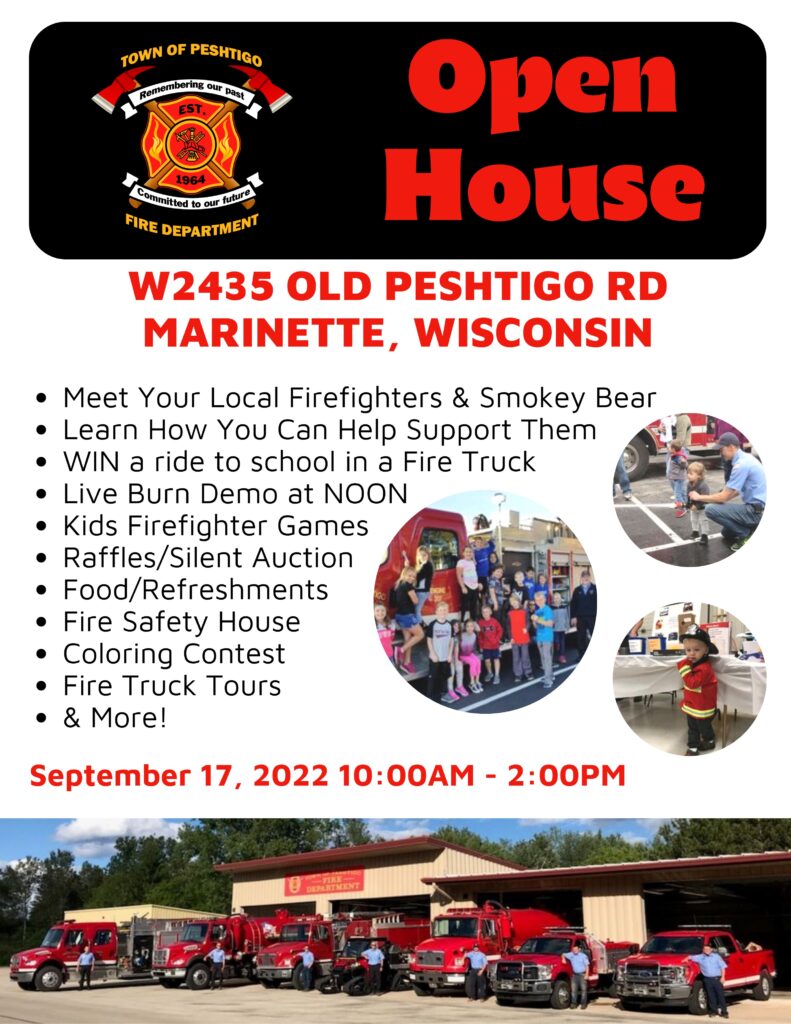